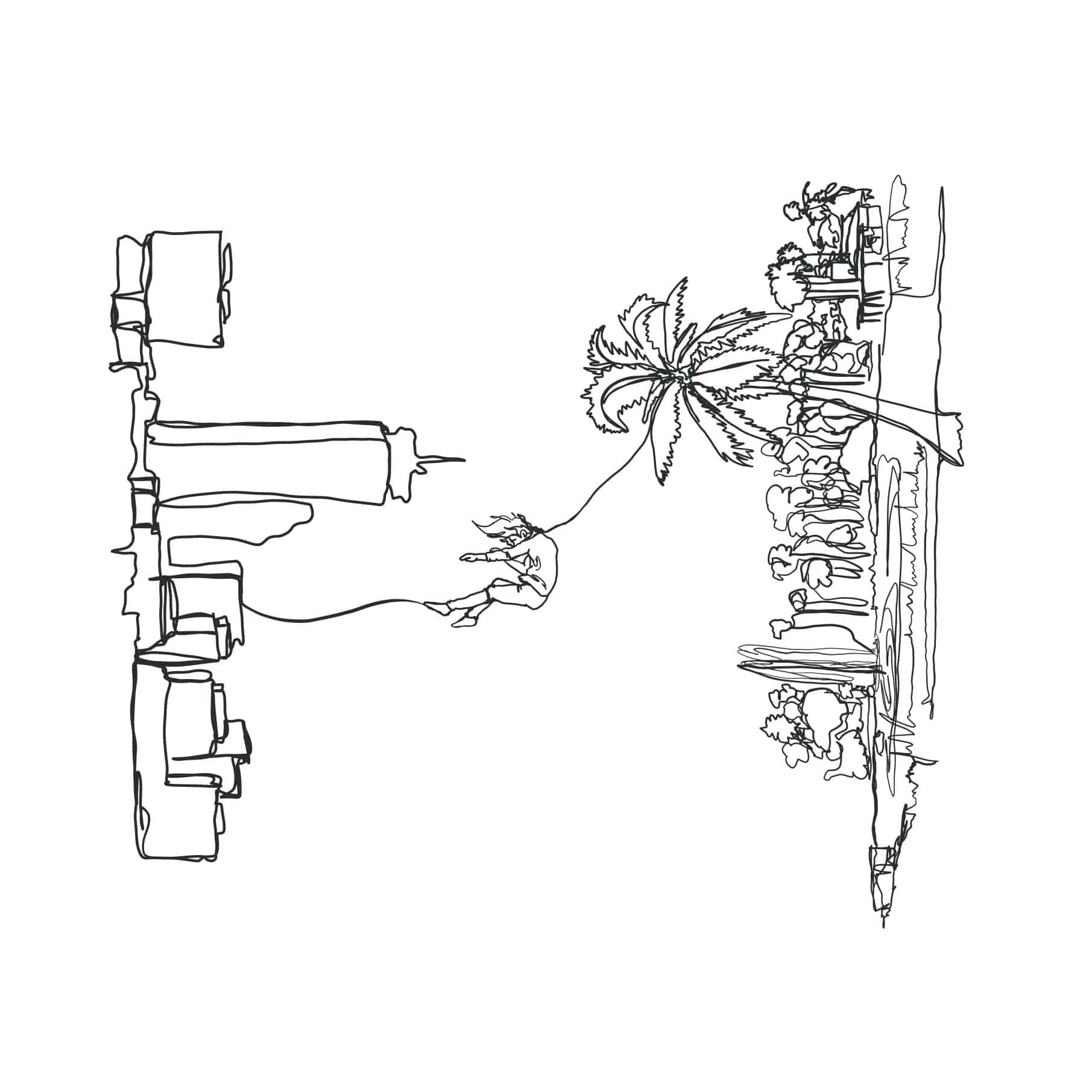 Be Here. Here being Echo Park, sometime in February. A lot is happening around me, but I’m not noticing it. I’m time traveling. I’ve been doing that a lot lately- I’ll fall deep into a memory or far ahead into an expected future and I’ll get lost in it for hours. Today is the first time I’ve had some freetime in a while and I wanted to spend it relaxing in Echo Park. It’s a nice day. There’s a light mist floating in on the wind from the fountain in the middle of the pond. I sit down and try to take it in, try to Be Here, but my chest starts feeling heavy. Everything feels wrong. Every word from a stranger, every smell of Los Angeles’s summer weather in winter, every song on my phone ungrounds me from wherever I am. I am time traveling.

And I am back There. There being my college dorm in Boston during my freshman year. I had a plan that seemed airtight; I was gonna be a sound designer for film and had already begun working on my first few projects. I was also in a folk band with a kid that lived down the hall from me. His dorm had a door that wouldn’t lock and his roommates were notorious for being night owls so people used to come by late at night to do work or play music. We’d play Bon Iver covers until 2am and talk family, music, (and especially) relationships.

That was on my mind at the time. I was in love, as far as I knew, with a whirlwind of a girl with the best taste in music. She’d take me to art museums and I’d watch her sit in front of a painting for as long as fifteen minutes. I was wrapped up in all of it – and I was terrified. I go back there a lot – I’m somewhere in the middle of a frozen fountain in Boston and she’s walking in an orbit around me, getting closer and closer. I’m somehow some eye of someone’s hurricane.

I didn’t want my life to change back then, but it always does. Sometimes slowly, daily; other times in a minute. But There I was one night outside a venue in Cambridge after a show at a cool venue (with a modest capacity). I hadn’t seen the show or heard of the artist that had played at the time, but I wound up meeting the artist all the same. Our conversation was calm and casual, which was unusual for her. The artist was insightful, ready to share every secret about breaking into pop music. She had ambitions, tools, and a very smart manager (who would share additional information about the music industry). She took my phone and put in websites I should check out and notes I should remember. I didn’t know what to make of any of it- at the time I didn’t care for pop music at all. I had an airtight plan that had nothing to do with music. But she was compelling and inspiring in the way that quietly shook the ground. A note: she has since sold out Madison Square Garden twice and has a song with over one billion streams on Spotify. None of that happened yet, though, not when she looked me in the eye and said, “You have the heart for this. You have the heart for this industry.” She pounds her fist on my chest when she says it and I’m pushed through time.

I’m back Here in Echo Park. I moved here for music. Something impossible worked out.  I’ve always wanted to live in LA and it happened. There’s a couple sitting on a picnic blanket in front of me. I can’t hear them over my headphones. My shirt is wet from sweat and the mist from the fountain.

I had walked back to my college dorm after meeting that artist (my head buzzing (or “ticking” as an ex once called it) as it does. When I get to my floor, I hear the kid down the hall working on a pop beat. I burst into his room and tell him we should start a pop group. So we did. Then some other things happened.

We keep moving. I’m back at the table with my brother as my parents are announcing their divorce. I’m back in my bed when I get the phone call that my cousins have been murdered. I’m back in New Paltz, wandering around the woods on the phone with the girl I was in love with. We’re breaking up because she’s moving to Paris. I called it “The Bad Summer”. As another time traveler used to say: So It Goes.

Time travel has a kind of integrity to it that’s strong enough to shield against the hundreds of daily panic attacks and millions of pieces of information that comes with living in a vibrant (and complicated) world. Maybe “the moment” is overrated. I often thought that people put too much weight on “the moment”– it’s talked about like some sacred, ethereal gem that requires mindfulness and meditation to truly “appreciate.” It didn’t sit well with me. The past and the future have always held more weight to me. The past is when the first rock was thrown into the water, where all the ripples and waves I’m treading now started. The future is the place I can run to, it’s the interviewer asking what it was like “before everything happened,” it’s my kid asking me how I met their mother, it’s the arenas, and the song on the radio. How could “the moment” compete with that? But I’m detached now, only caring about where I am or was or when I’d travel back to it.

Right Here in Echo Park, I’m in a haze. I try to take it in. I’m in LA. I made it here. But it took a lot out of me. I always thought I’d run out of room to care about people or place, but so far it’s only managed to expand to the point of heaviness. You carry everything with you wherever you go.

The built-in irony in writing about “the moment” is that, in typing,  procrastinating, and revising this, I’ve actually time traveled – this time physically instead of mentally. Weeks and months passed to the point where once vividly current descriptions become nostalgic retrospectives, dully gnawing at the back of my head. We keep moving, no matter where our head goes – every day is both too long and too short. We keep moving, with the weight of what has happened and the pull of what is yet to happen, each fighting for attention and gravity. I stand by that “now” isn’t as grand as “before” and “after”, but I’m learning (slowly, daily) that it doesn’t have to be. Any single moment, if only for a moment, is lighter – lighter than the stacks of timelines and details in my head. It’s as light as a breath. I’m back by the lake in Echo Park, feeling the air and the mist. 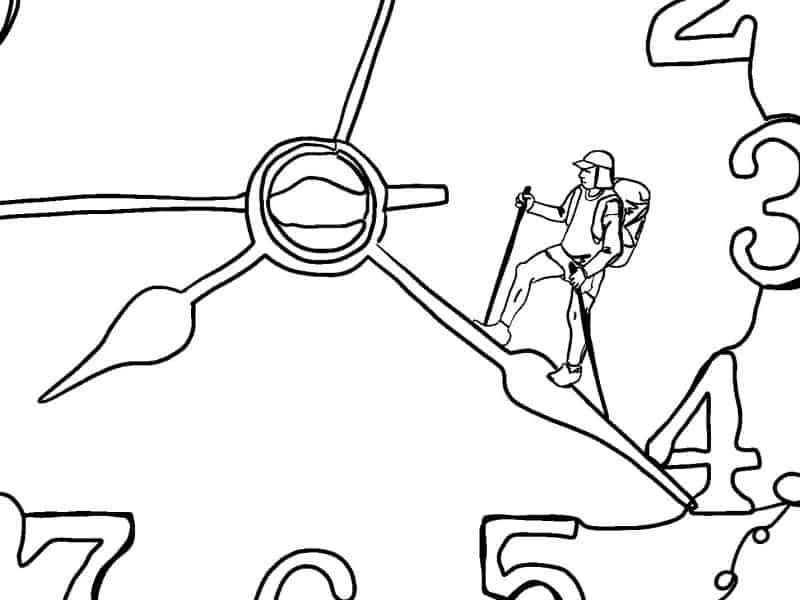