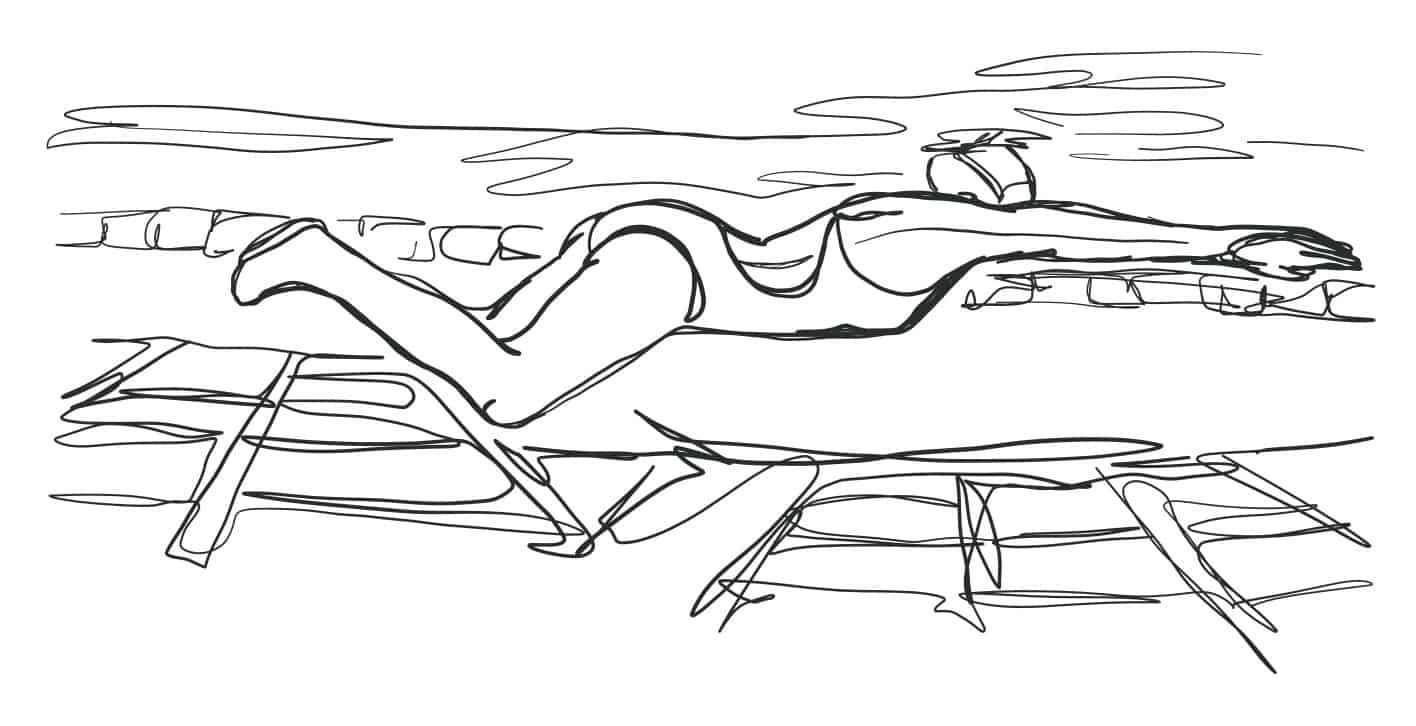 As a little kid, being at the pool always excited me. When I was nine, a local swim club coach saw potential in me and asked my mother if she would be willing to sign me up for competitive swimming. She accepted the invitation simply because she thought I had too much spare time. Yet that one spontaneous decision developed into something that would change my life.

For a full year after I started swimming, I was the slow and unskillful kid who didn’t know how to swim butterfly, properly dive off the blocks without belly-flopping or do a flip turn without hitting my head against the wall. I raced against eight year-olds and lost. It was so bad, I avoided practice half the time.

It didn’t help that my very traditional Chinese parents viewed sports as a risky career path. As the only child in the family to have the opportunity to grow up in North America, my parents had high expectations and strict rules. Simply put, I had a tiger mom who signed me up for many after school activities, ranging from skating to piano to writing lessons. She wanted me to be excellent in school, and decent in everything else. As this overriding pressure built up, swimming became my only and most dependable outlet.

Swimming became my escape for every emotion I experienced. If I had a bad day, I would come home after school, change, pack for practice and within 30 minutes, stand on the pool deck with my best friends ready to take on some challenging sets. The moment I dove into the freezing water, everything felt okay. My sadness disappeared. I stopped being stressed or tense; I felt energized.

Because people associate teamwork with sport, they tend to overlook the lonely, isolated, companionless aspect of swimming, especially at the early stages of starting the sport. Yet it was the focus on the individual that made swimming so special to me. When I attended practices, it was me against everything else. I had control over every way my body moved – from the way I turned my neck to my left side to breath under my shoulder in freestyle, to the force of my kick off a flip turn, to the strength and power I felt in my arms and legs with every breaststroke. As time passed, swimming eventually became a daily routine that I couldn’t live without, and I made many lifetime friends. It’s a special bond that can’t be broken. My teammates became my best friends; the pool my second home; the sport my identity. I would show up to practice in my PJ’s with excitement even if it was 5:15 A.M. The water felt refreshing, and by 7:30 A.M., I had already done something meaningful, and was ready to take on more.

After some time, I found a second home in my swim team.Though the competition was cut-throat, the atmosphere was still friendly because we wanted each other to succeed.  Whenever I stepped on the blocks, I knew it wasn’t just me—it was all the tears, all the pain, all the road trips, all the training camps, all the practices, all the hard work, all the inside jokes and laughter. Every race represented so many things and memories.

Swimming became my everything. And because it was my everything, my mother would take advantage of my passion and use it against me. Up to this day, I can still remember the ghastly punishments I would have to go through if I had a single B on my report card. One year, my mother made me skip the most important swim meet of the season after I had already registered. She knew I love swimming and would use the thing that I cherished the most to punish me for less-than-perfect results in other areas of my life, school especially.

I threw myself even more into the sport as much as my mother would let me. When I swam, my mother’s voice in my head warbled and faded away. All I could hear was the water flowing, splashing, moving around me. But just as I became more dependent on swimming, I stopped improving in the same event (100m breaststroke) I used to qualify every meet with. I had practice everyday except on Sundays. Every month, I would race my best event. And for 730 days, my time stayed stagnant. I dropped from a provincial finalist to coming in last in the event that I was best at.

I had a difficult time recovering. I felt like I have completely failed. My mother’s chastising voice, seemingly ever-present, contributed to my feeling of failure. I accepted my coaches’ suggestion to switch strokes. Six months later, I rediscovered my confidence as a butterflyer – I understood the power of fear and how to not let fear take control of my performance at swim meets. I had the water again, the solace it brought and the feeling of power radiating in every limb. But it was too late.

Still, what I can do is carry all the values swimming taught me. I learned to cope with failure and make it my friend. I learned to look at what I did wrong, think about what I can do better and, more importantly, discover what remains in the realm of my future. What I gained from swimming also positively affected my parents, because they realized how sports could build tremendous discipline and perseverance. I’m happy to say that they no longer fall underneath the Tiger Parent stereotype. In fact, they influence my decisions less and less and support me in whatever I decide to pursue.

Everything I experienced from swimming stays with me. I study sports business in college because I appreciate all the values swimming had taught me. The feeling of pushing myself to the limit is the ultimate reason why I enjoy going to the gym and swimming today, and I will continue to carry those values for the rest of my life. Though I am no longer competing, I am constantly looking for that similar fiery passion I felt for swimming in everything I do because passion really does make a difference. It drives actions, and motivates me in ways like nothing else can. At the end of the day, swimming is more than home. It’s who I am.